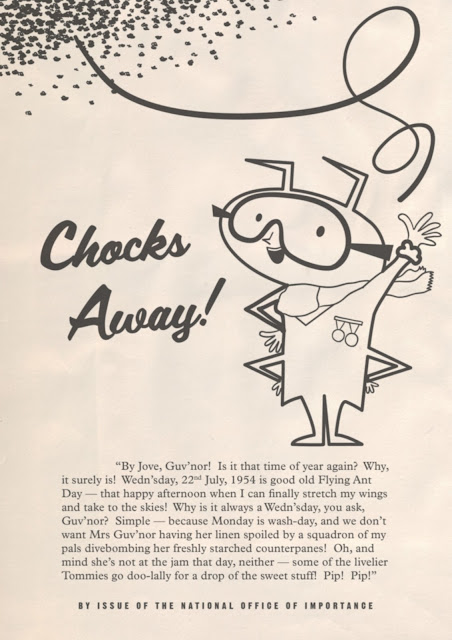 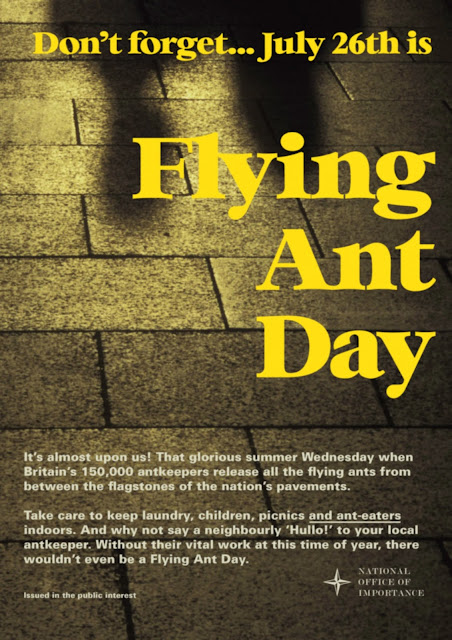 How the times they are a-have-changed.

Once the friendly flying ant was as welcome an annual sight as the Padstow Mummy or Doctor Christmas. Now the insect has fallen from favour, and its day (traditionally the third full sun of July) is seen as nothing more than a regular nuisance.

The change seems to have taken place in the 1980s, when increased awareness of sub-surface pestlife like moles and soil turtles was met with the might and maybe of the poisons industry. Turtle powder and mole hammers were regulars under the sinks of the nation’s sinks.

In the 1950s, people were encouraged to put out a saucer of sugary batter to welcome the popular arthropod into their home, to bring good luck or, at least, a stay to any forthcoming death.

But after Britain joined the Common Market, an increasingly busy populace didn’t have time to prepare the Anting Bowl, and neighbours no longer gathered to bob for faeces alongside their insect friends. Ant Carols were no longer sung, and only children on the Isle of Hair now dress as Ant Henry VIII.

By 1978, the only airborne formicida was an unseen character – part of its sad downward journey from local feature to threat, much like the urban fox and the postman. And, by the 1980ses, a traditional Flying Ant Day costume could only be seen in the record videos of pop man Adam Ant, who had chosen the trappings of the ritual – including Ant Henry VIII’s distinctive nose stripe – to promote his double-drum music.

Posted by National Office of Importance at 22:08 No comments:


A tireless programme of national jam making, competitive vegetable husbandry and choir practice had all but eradicated the perilous sickness of boredom in Britain by 1970, when a new hovercraft link to the Continent and a vogue for day trips sparked fears of contamination from abroad.

Suddenly our spectred isle was vulnerable to virulent foreign strains of boredom, such as German Weltschmerz, French ennui, and the Dutch molenvermeidheid (literally ‘windmill fatigue’, caused by the infrequency of vertical objects on the horizon of the low countries).

After Mrs Sarah Kettleship, the infamous ‘Patient Zero’ shrugged herself to death in Felixstowe in 1974, the focus turned sharply towards the group perceived to be at the highest risk: Britain’s housewives, with their repetitive routine and depressing rollerblinds. 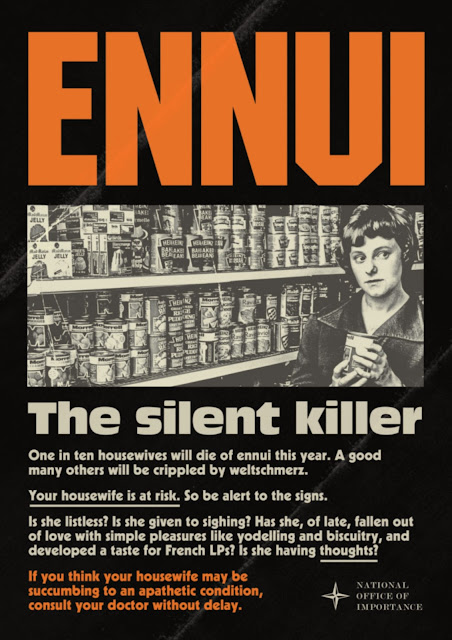 Initial attempts to stem the blight of apathesis included quarantine kennels for globetrotting housewives returning from Calais and Rotterdam, and the introduction by Whitehall’s Central Planning Secretariat of a string of national talking points, starting with breakfast television and ending with AIDS.

Opinion is divided as to whether ennui was ever a real threat. Experts still disagree on what wiped it out, attributing it to a wide number of factors including upstairs phones, the Kays catalogue, and everything.

Posted by National Office of Importance at 14:23 2 comments:

The building of the New Towns in Britain was the biggest construction project in mainland Europe since France’s national basement was dug in the 1920s. The third wave of towns included Milton Keynes in Buckinghamshire, Telford in Shropshire, and (Untitled) in Woldborough.

(Untitled) was a troubled undertaking from its inception. The architect, Rolfgang Üd, was unused to the compromises of communal planning, and demanded full rein to explore his dream of building as a “concrete ballet”. Many of the houses he designed had no windows, to avoid “the grotesque discontinuity of curtains,” and his insistence that the radical town centre include three art galleries and a “water library” left planners scratching their drawing-boards. 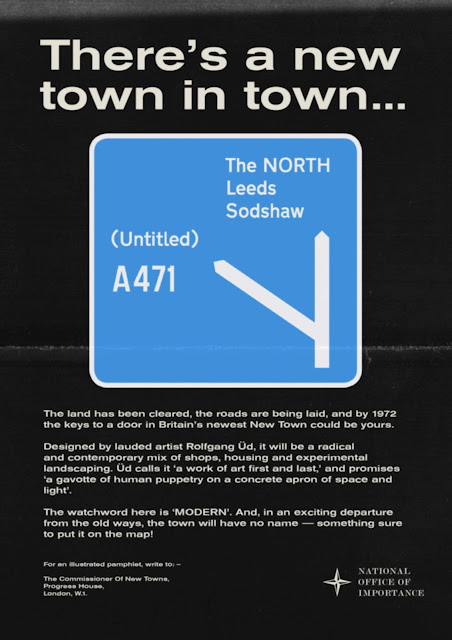 But it was the town’s name that caused the biggest headache. All Üd’s works were untitled, and he saw no reason why the New Town should be any different. The Postmaster General, Anthony Muchless, angrily challenged Üd to compose a usable address for the citizens of (Untitled). Üd refused to be “musclebound by envelope culture” and further entrenched his position by suggesting the roads be identified by “smells and sighs, building a city of memory and intensity”. Muchless resigned and threw his ministerial car into the sea in protest.

When the first residents of (Untitled) complained that they were unable to receive post or have a telephone connected, Üd replied, “for this they should thank me; I have gifted them more time for contemplation”. The town never achieved even 15% occupancy, and was empty by 1981. It was blown up by Roy Castle on It’s A Christmas Knockout! in 1983, provoking Üd to send the BBC a dead panda as a “gesture of syllepsis”.
Posted by National Office of Importance at 10:44 3 comments:

“Sound synthesis” was discovered one freezing summer afternoon in 1941 at the GPO Research station in Twelveford by Dilwyn Elis Llwy and Herbie Fussiter, two electrical engineers working on the typedryer (a predecessor of the hairdrying typewriters of the 1960s).

No military use was found for the synthesizer, despite enforced deployment of the device at mess dances (one furious Colonel described “entreaties to boogaloo to the sound of a robot with gut-rot”), and eventually the technology was quietly put into the civilian realm (as happened with Teletext, Bigtrak and Toast Toppers). 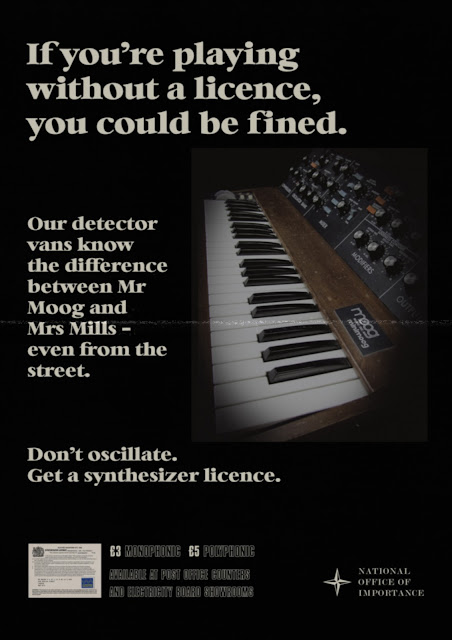 The synthesizer licence was introduced in 1969 when a quick-thinking junior Treasury minister heard that The Beatles were using one on “Here Comes The Sun”. Rushed legislation was passed in Parliament before the band reached take two.

Editor’s note: Among the materials for this design found in the NOI’s archive was the original synthesizer licence featured in the poster. Though it has aged with no little grace, it is notable for its famous owner: Brian Eno, the flamboyant glam-rocker behind the chart-topping Windows operating system. 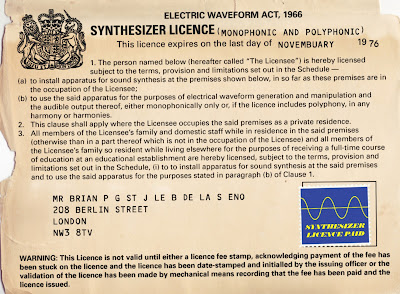 Posted by National Office of Importance at 17:12 3 comments:

The period immediately following the grand finale of the Second World War found Britain exhausted and impoverished. In an act of unprecedented social engineering, a mass re-energisation was planned, including injecting everyone under the age of 50 with orange juice, and the introduction of the ‘Doctor, Doctor’ joke as a national fillip.

But not all were convinced. Sir Constant Payne, Minister of Labour, who coined the phrase ‘feed them sticks and leave the carrots to their idiot dreams,’ took a dim of view of the project, ridiculing it as ‘no better than putting the country to Nanny’s bosom to cork its mewling’. 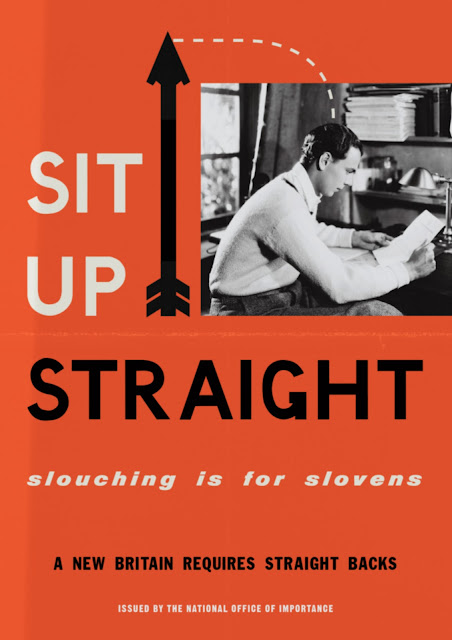 His idea was to bully the nation back to its senses, and this was the first of 115 posters he commissioned from the NOI. In his memoirs, No Book For Fools, he wrote

[T]he sight of Britain’s young men slouching like dead tramps in a canoe was enough to make a chap want to take a ferula to their sit-upons. I resolved to get the nation’s backs straight once more – even if I had to break them myself.

The privatisation of government assets was reaching boiling pitch by the late 1980s and, having sold off Britain’s oil, gas, water, electricity and weather, there seemed little left in HM Government’s asset bank except food and miasma. That is, until one Treasury brightclogs came up with the notion of selling off Britain’s views. 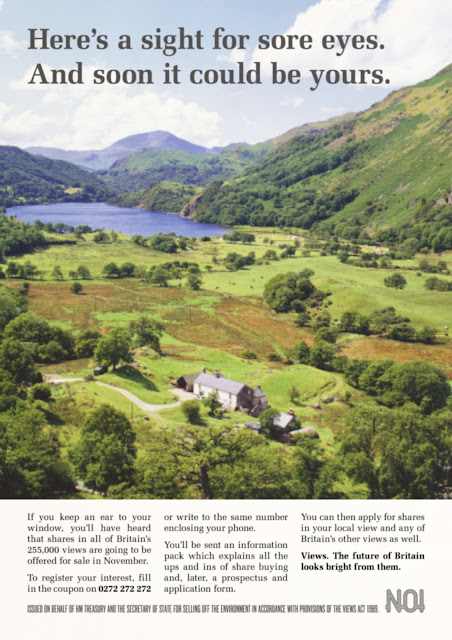 The NOI was co-opted to design the advertising campaign, and the flotation took place on 3rd November 1989. The initial share price of 83p rose to £10.32 by the end of the first day’s trading, making multimillionaires of some lucky millionaires.

Posted by National Office of Importance at 10:56 No comments:

The NOI ran this hastily conceived poster in theatres and working men’s clubs in 1955. That year, polite and rude society alike had been outraged by the infamous case of R. v Treadles, brought after popular ventriloquist Archie Treadles was caught red-fingered leaving the dressing-room of rival act Wally Pippin at the Lincoln-on-Land Alhambra.

Treadles at first denied any unpropriety, saying he’d come backstage to congratulate Pippin on a fine turn. And when Pippin admitted under cross-examination that he hadn’t been in the room when the offence was said to have taken place, it looked as though Treadles would be acquitted.

But, in a surprising twist, Pippin’s doll, Señor Moneybags, took to the stand – the only time a ventriloquist’s dummy has been called before a court – and told a shocked Old Bailey that Treadles had “come and got me out of my gox and had a go on me”. His evidence was devastating. 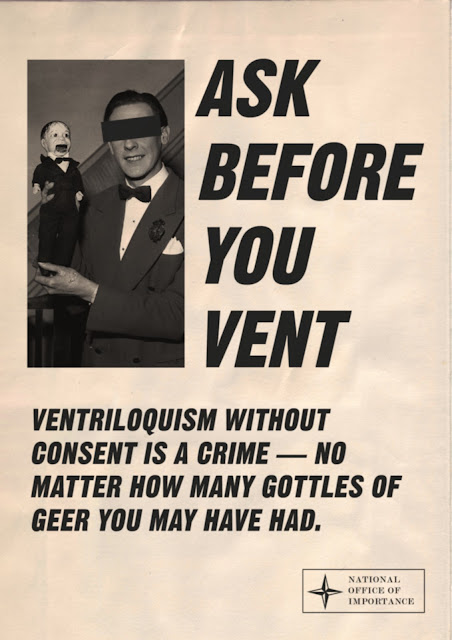 The press of the day spared the public the grislier details, saying only that Treadles was accused of performing “a variety act” on another’s doll. Treadles changed tack in the face of so damning an accusation, saying he had mistaken Señor Moneybags for a wooden glove, but his defence was in tatters, and he was found guilty and bound over for £350. After his conviction, his own puppet, Dickie Tummie, never spoke to him again.
Posted by National Office of Importance at 11:42 2 comments:

National Office of Importance
From 1915-2003, the National Office of Importance carried out its statutory public duty “to inform, insist and admonish” on behalf of the British Government. Seen by some as a necessary conduit, and derided by others (notably the formidable editor of The Times, Auberondley Handelsman, who memorably dubbed it “a zoo of nannybodies, nincomboobs, whows, bingo-morts, gundiguts, mopsies and trotterclouts given inexplicable charge of a printing press”) many of its campaigns and much of its publicity material has now become as fondly-remembered a part of the cultural landscape as coddled eggs and transistorised wainscotting.